The history of the vine

It is so old that it merges with the history of mankind. The vine and the wine have represented an important element of societies, intimately associated with their economies and their cultures ... Its existence is the fruit of a long and eventful history. 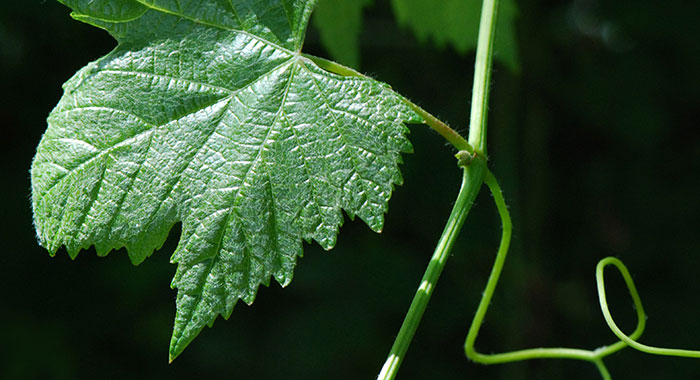 In the Mediterranean region, the wild vine (Vitis sylvestris) grows spontaneously. These wild vines produced small black berries with a bitter taste, which were most likely first eaten as food. In the south of France, the grapes for lambrusque were already picked and harvested since the Lower Paleolithic between -500,000 and -120,000 years ago.

Wine as early as the 6th millennium B.C. 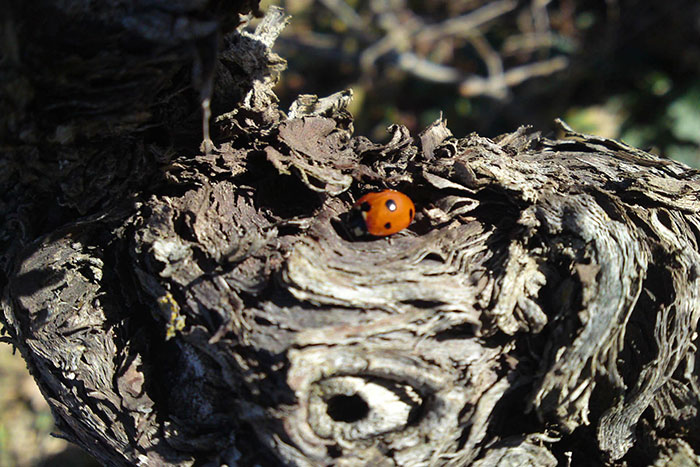 Our Neolithic ancestors loved to eat grapes. At that time, hunting and gathering still provided most of the food... Vine wood was gathered and used as domestic fuel and humans consumed the berries of the wild grape... from which they made wine! In the Near East, cultivation and breeding rapidly replaced hunting and gathering during the Neolithic period. It was in this region and at this time that the vine was domesticated. This is also where the oldest remains of wine production can be found.

The emergence of viticulture is generally located in the mountainous areas of Transcaucasia and Zagros in the Near East. The transition from wild vines to cultivated vines would have taken place there between the 6th and 5th millennium B.C.. Humans in prehistoric times probably began by making drinks, fermented or not, from wild grapes before cultivating the vine. Other fermented drinks probably existed from that time, based on fruits (elderberries), cereals (beer) or honey (mead). In any case, wine was drunk as early as the 6th millennium. 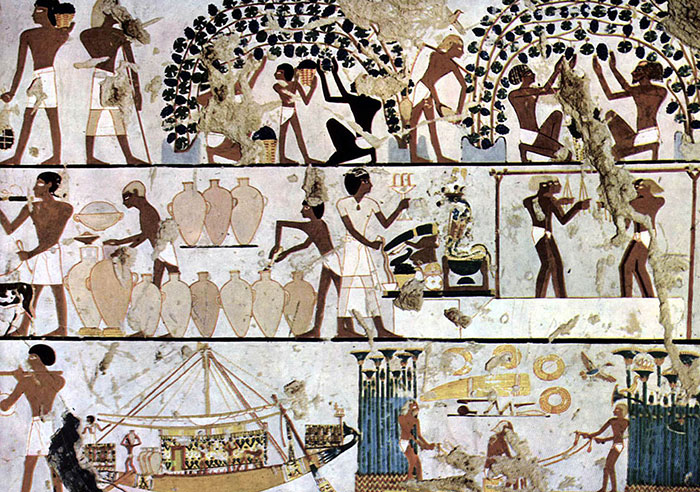 In the wild, the vine grows like a liana, with tendrils on its branches, and climbs on trees and shrubs on the edge of the forest or crawls on the ground. This vine produces berries, small and acidic, which our ancestors most likely picked to eat directly. In the Caucasus region where the first evidence of the cultivation of the vine was discovered, dated from the 6th to the 5th millennium. By selecting the largest, juiciest, or tastiest berries, or by using other criteria of interest, our ancestors began to favor vine varieties by multiplying them with cuttings or seedlings. This practice allowed the first identical vine varieties to gradually appear. It is these varieties that, much later, were transported and spread around the Mediterranean by the Phoenicians, the Greeks and then the Romans.

In Egypt, it seems that the culture of the vine was established during the first two Thinite dynasties (3100 to 2700 B.C.).

One finds in the culture traces of the emergence of wine. The ninth chapter of Genesis describes how, after the Flood, Noah began to cultivate the earth and plant vines. After drinking wine and getting drunk, he fell asleep naked in his tent. His son Ham discovers this and tells what he saw to his two brothers, who in turn enter the tent and cover their father with a mantle. When Noah wakes up, he is ashamed, gets very angry and curses the son of Ham, Canaan. 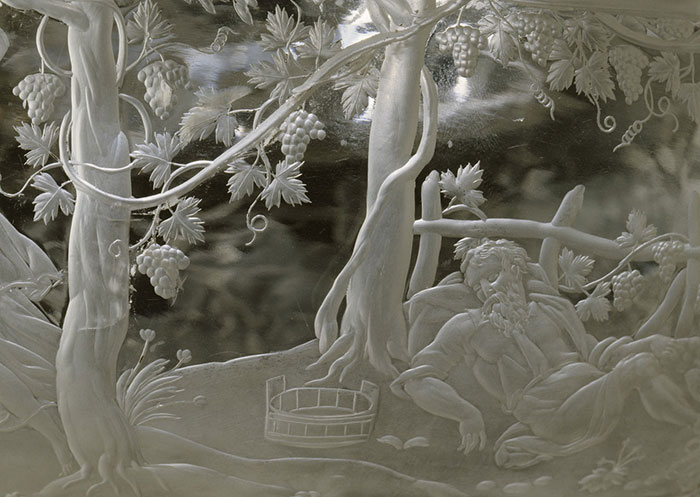 The expansion of viticulture

Part of the Near East, the cultivated vine spreads eastward. It reached India around 500 B.C., but it is not known whether the grapes were consumed there as fruit or as a fermented drink. On the other hand, the Chinese taste for wine is known as early as the 2nd century B.C., during the Han dynasty. However, it is especially by spreading westward, in particular thanks to the maritime trade in the Mediterranean, that the vine and the wine will durably register at the same time in space and in civilization. 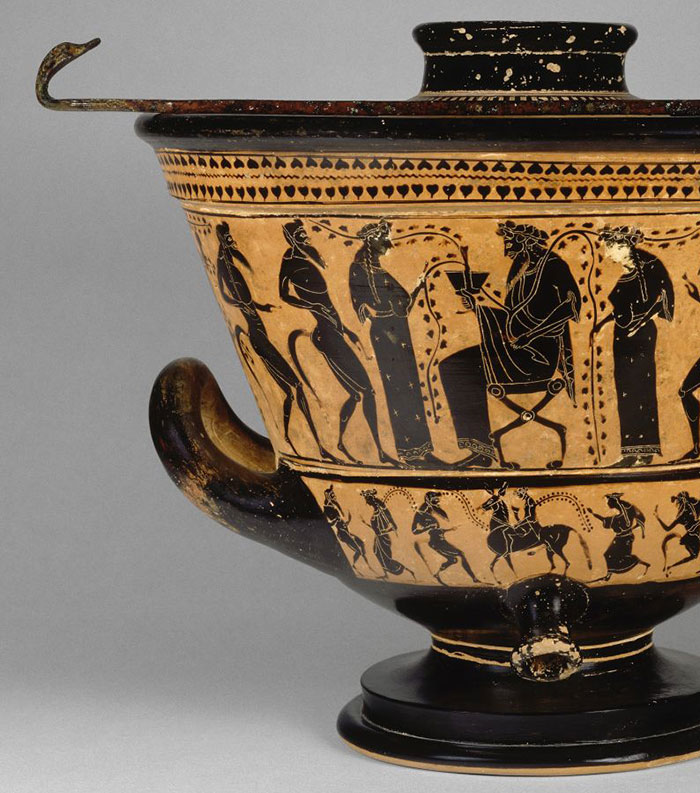 The cultivation of the vine spread from the Greek colony of Marseille, founded around -600 B.C. From the middle of the 6th century B.C., the production of wine amphoras ensured an important development of viticulture, traces of which have been uncovered in the city's inner suburbs. The Midi Gauls cultivated the vine as early as the Iron Age: one of the oldest sites having delivered the remains of cultivated vine grape seeds, the port of Lattara (Lattes, Hérault), made it possible to establish this culture as early as the end of the 6th century B.C.. From this time, viticulture spread punctually along the coastline of Provence and Languedoc.

At the same time, a culture of wine, with its mythology, rituals and modes of consumption, rich in representations and artistic production, spread from Greece and then from Italy to Gaul. In internal Gaul, however, wine remained uncommon until the 3rd century B.C.. Although some southern peoples, such as the Salyens, produced and consumed it, the vast majority of the Gauls in the interior only drank it during festivities (Arvernes, Aedui). Some people even forbid to buy it from Italian merchants because they consider wine to be softening. 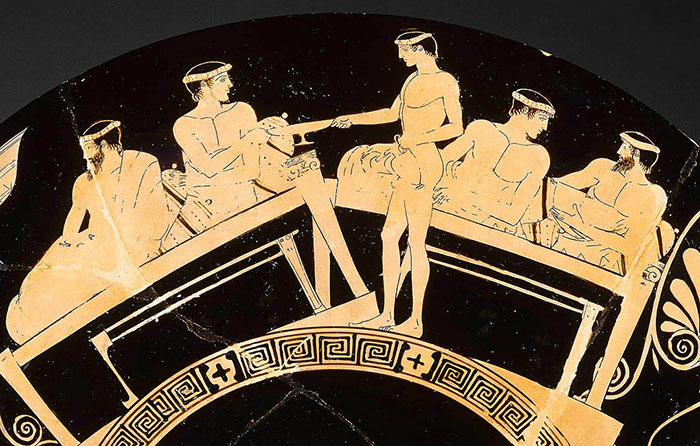 In classical Greece, the meal was divided into two parts: the first part was for solid foods, cereals and meats; the second part was for liquids. In large craters, wine was mixed with water in proportions discussed among the guests. Tables cleared of the leftovers of the meal were loaded with cups and vases. Everyone prepared by washing their hands, perfuming themselves, and decorating their heads with a crown. The second part of the banquet, called symposion (literally "drinking together"), could then begin. The master of the banquet, the symposiarch, ensured the smooth running of the party, the harmony and the rise of collective drunkenness. He encouraged the guests to recite poems, play or listen to music, drink and be entertained. Symposion is a social and ritual practice around which part of Greek culture is built. Attending a banquet is a sign of belonging to an aristocratic elite. In order to be respected by others and to pass for a cultured man, it is necessary to know how to stick to it. Except for hetairs (courtesans or prostitutes), women are not allowed.

From the 2nd century B.C., the consumption of wine became a common practice among the Roman population. But the organization of banquets, called convivia, remained the prerogative of the wealthiest social classes. At that time, the gap between rich and less rich widened. For the Roman aristocracy, convivia were a pastime. Unlike the Greek symposion, wine was drunk throughout the meal.

Bacchanalia, orgiastic feasts linked to the cult of Bacchus, were held three times a year, they were initially diurnal and reserved only for women. A priestess, Paculla Annia, who came from Campania, imported them to Rome, considerably changing the rules and the essence. Ceremonies were now held at night and five times a month. Open to men, all the participants being held in secret, the bacchanals were then transformed into real orgies, where all excesses and crimes were allowed. According to Tite-Live, nothing could be considered morally forbidden. The initiates who did not submit to it were killed or disappeared. 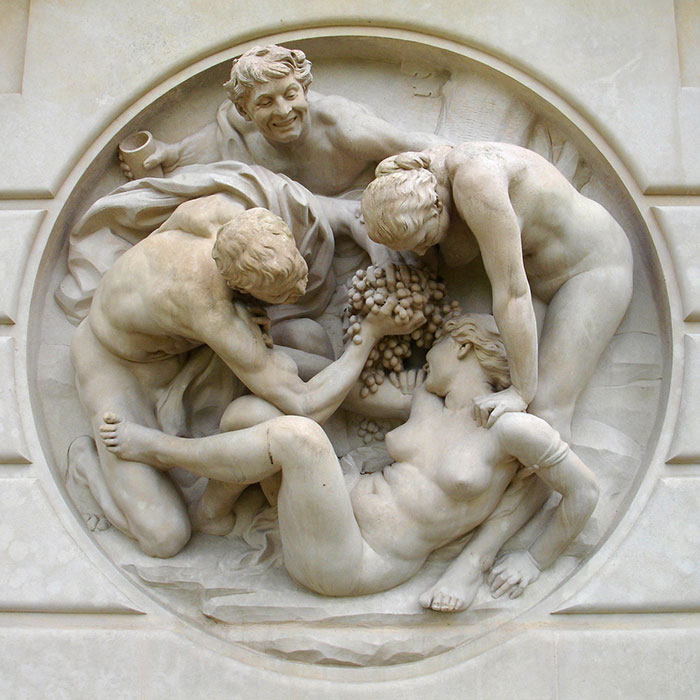 Apogee and decline of Gallo-Roman viticulture

From the 2nd century B.C., vineyards spread around Marseille, Nîmes, the Agde region and the Hérault valley. The creation of Roman colonies in Narbonne from -118, and later in Béziers, Arles, Orange, Fréjus, gives a decisive impulse to the creation of a great vineyard in Narbonnaise. 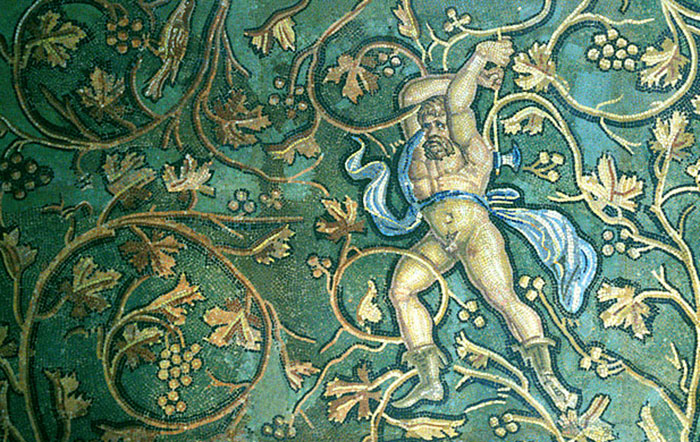 The cultivation of the vine extends towards inner Gaul during the 1st century B.C.. Little by little, the expansion concerns all the provinces of Gaul, as far as Normandy. We follow the traces of the wine trade through the study of amphoras, replaced by barrels in the course of the High Empire. The use of wood (putrescible) for the manufacture of barrels then makes the estimation more difficult.

The 2nd century marked the peak of wine production in Gaul, before a crisis of multiple origins (decline in population, land grabbing by the richest, ravages of invasions, disruption of trade, decline in urban consumption) led to the abandonment of part of the estates and the reconversion of vineyards into ploughing land or pasture. 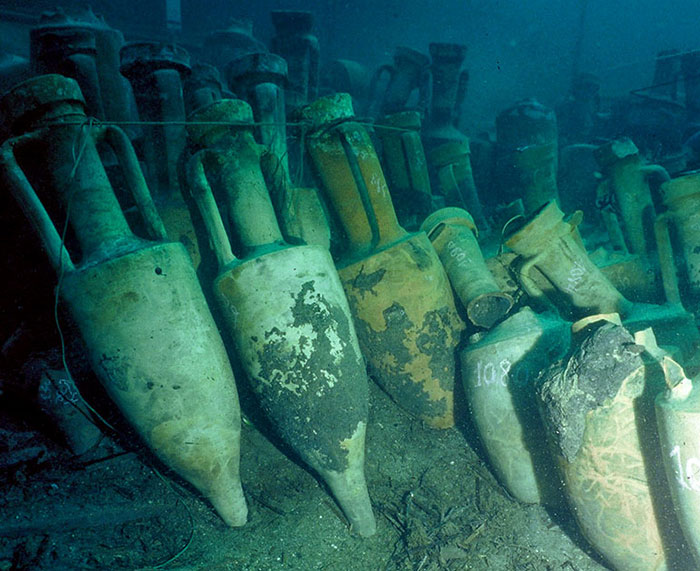 The Church and the vineyard in the Middle Ages

Under the Merovingians, in the High Middle Ages, the vineyard regressed all over the territory. We owe its survival to the work of the monks of abbeys established in the countryside, who undertook to continue the cultivation of the vine. 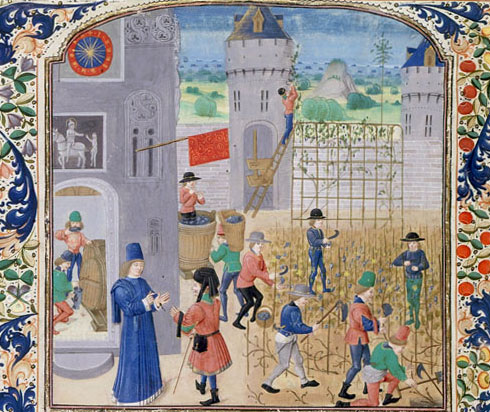 In the cities and nearby, the vineyard lands belonged to the bishops, the first figures of the cities, as well as to a few lords. If wine is used ritually in the liturgy, it also manifests the generosity and prestige of the host in front of travelers and visitors of quality.

From the 11th century onwards, monks planted vineyards far beyond the sites suitable for wine growing, in Brittany, Flanders, in the northern regions of England, as far as Pomerania or southern Denmark !

Income from the cultivation of the vine is not negligible. Wine therefore becomes a factor of wealth, so much so that bishops, sovereigns and lords, mindful of their interests, see themselves endowed with many privileges linked to wine (possession of the presses) and its sale (benefits, taxes). 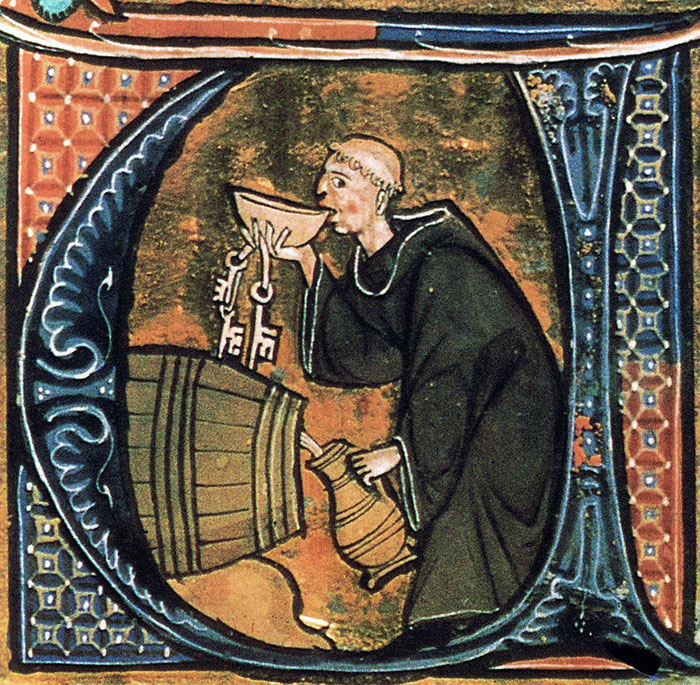 With the rise of the bourgeoisie of the Northern countries, who were very fond of white wines, the production of the Rhine vineyards and the North of France was no longer sufficient. The great wine-growing regions that we know today, Burgundy and Bordeaux, developed then.

At the end of the Middle Ages, the consumption of wine increases; a popular viticulture is set up, with the plantation of coarser grape varieties but with important yield. In the 15th century, Paris had no less than four thousand taverns ! 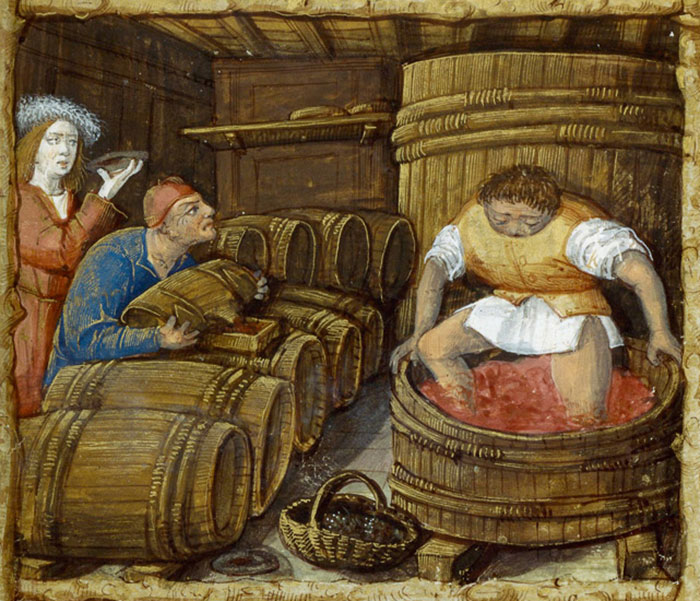 During the Renaissance, wine traveled by road, by sea, by rivers and canals, in barrels, casks and ships... A new type of container, the glass bottle, is put into circulation and the use of cork reappears for the manufacture of stoppers. 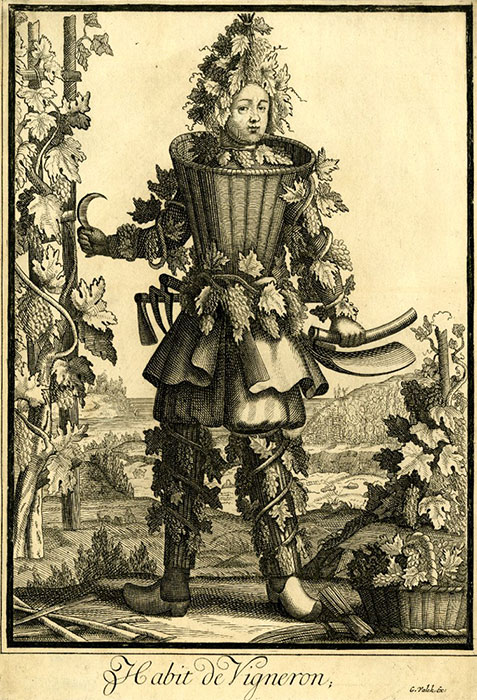 From the Loire Valley to the gates of Paris and the Ile de France, the country is covered with vineyards. Originally producing a quality wine, the Parisian vineyard loses, in the 18th century, its noble grape varieties in favor of the Gamay, which allows an abundant but mediocre production. Champagne gives birth to a wine that will soon become famous. 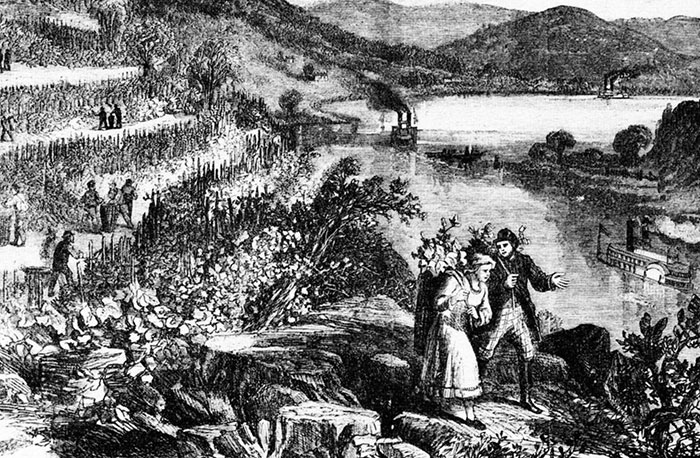 The Dutch, after having sparked off the production of brandies in the southwest of France (Saintonge and Cognac), turned to Spain and then Portugal, where they helped develop wine in the region of Porto. In North America, the first attempts to cultivate a native vine are hardly convincing.

The wine is consumed in many places, including taverns, cabarets and popular guinguettes that flourish at the gates of Paris to avoid the payment of taxes at the octroi barriers. Smuggling and fraudulent trade flourish . When in 1789 the general farmers' enclosure extended the fiscal perimeter of the capital by several kilometers, leading to the annexation of all the guinguettes, the insurrection rose. 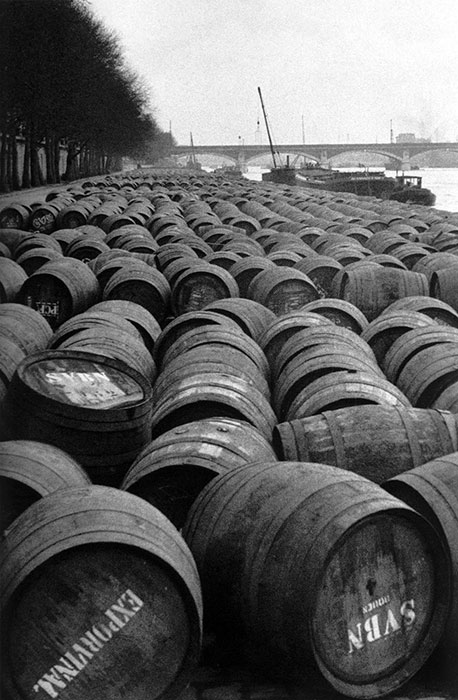 In 1864, the phylloxera crisis, which failed to eradicate it, plunged viticulture into its first major crisis. This tiny yellow aphid from the United States, which attacks the roots of the vine, gradually destroyed almost the entire French vineyard. In 1885, the national harvest increased from 80 to 25 million hectoliters. Finally, the remedy was found: French grape varieties were grafted onto American rootstocks that were naturally resistant to the insect: the reconstitution of the vineyard was then possible. The phylloxera crisis led to a shortage of wine, encouraging fraud and the production of artificial wines. 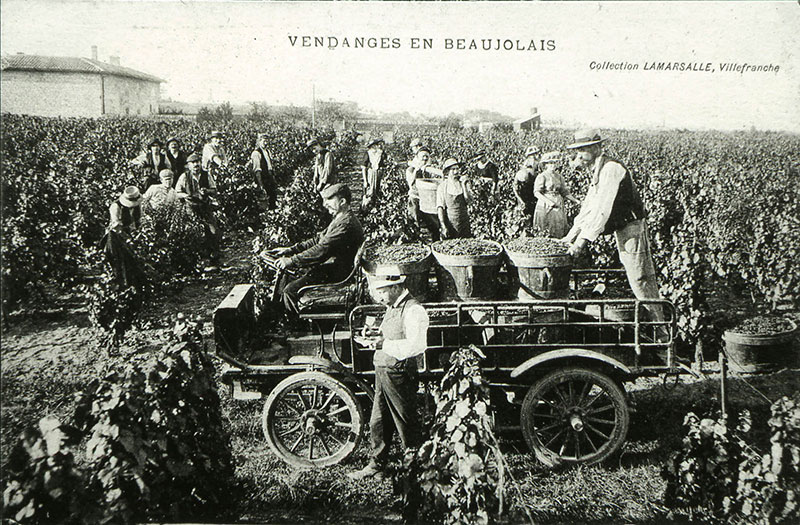 Until the middle of the 20th century, viticultural techniques and winemaking methods were enriched but without much change. Most of them are still used today.